When medical professionals talk about abnormal vaginal bleeding, or abnormal uterine bleeding, what we mean is bleeding that is irregular – either because it occurs at times other than during a woman’s period, or because the period itself changes, becoming heavier, lighter, longer, shorter, more frequent, or random.

How can you tell if your bleeding is irregular? Here are a number of signs that may indicate you have abnormal vaginal bleeding: 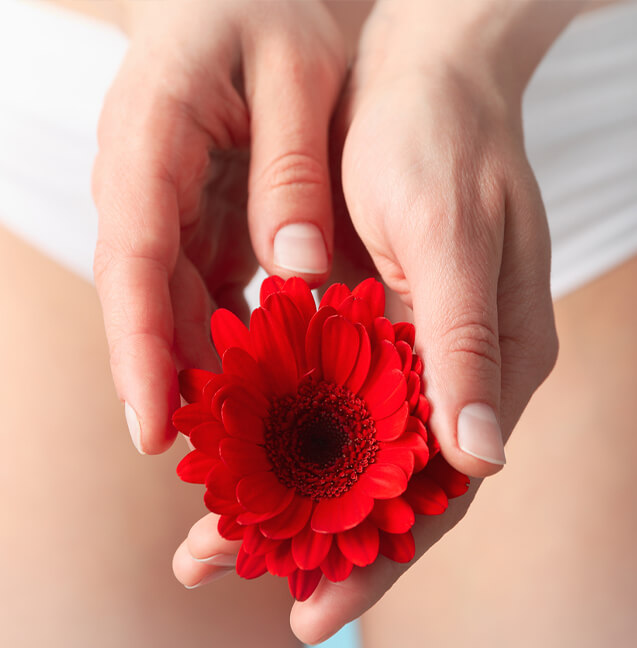 So, What Is Regular Menstrual Bleeding?

A menstrual cycle is the series of changes that occur within a woman’s body every month as it readies itself for the possibility of becoming pregnant. The entire cycle may last anywhere from 21 to 35 days – although it is important to note that menstrual cycles can vary significantly from woman to woman.

The menstrual cycle is made up of the following phases:

The menstrual cycle begins on the first day of a woman’s period (menstruation), which may last between 2-7 days. Menstrual bleeding is the result of thickened uterine lining being shed when pregnancy does not occur.

In the next phase, which lasts for a week after menstruation, hormones rise, the uterine lining thickens, and follicles in the ovaries grow – one of which will become a mature egg. This is called the follicular phase.

Ovulation, when hormones trigger the release of a mature egg from the ovary, occurs at the end of the follicular phase. A mature egg is released at about Day 14 in a typical 28-day menstrual cycle.

During the last two weeks of the menstrual cycle, the egg travels through the fallopian tube to the uterus. If fertilized, it becomes implanted in the uterine lining, and pregnancy phases begin.

If the egg remains unfertilized, hormone levels drop, ultimately leading the cycle to begin again with menstruation. The bleeding during menstruation is when the thickened uterine lining that grew in anticipation of possible pregnancy is shed in blood that leaves the body through the vagina.

This is called the luteal phase.

There are two main categories of abnormal (irregular) vaginal bleeding: irregular menstruation and bleeding that occurs at a time other than during menstruation.

Treatment for menorrhagia and other types of irregular menstruation will depend on its cause, which may include a hormone imbalance, IUD use, uterine fibroids, endometriosis, and more.

Bleeding Outside of Menstruation

Vaginal bleeding that occurs at a time other than when you’re menstruating is another type of abnormal (irregular) vaginal bleeding. It is also sometimes referred to as metrorrhagia. This includes bleeding or spotting between periods, after sex, before puberty, or after menopause.

The most common cause of this type of irregular bleeding is a hormonal imbalance, as when high estrogen levels are not balanced by an appropriate level of progesterone. This stops an egg from being released from the ovary while at the same time thickening the uterine lining, resulting in it shedding irregularly.

Treatment will depend on the cause of the bleeding. Treatment options may include hormone supplements, antibiotics, IUD removal, or surgery to remove uterine fibroids, polyps, cancerous tissue, or otherwise treat the underlying condition.

Your Women’s HealthFirst OB-GYN will begin your assessment with a thorough review of your medical history and discussion of your symptoms. Having a symptoms journal that notes when during your menstrual cycle your symptoms occur can be helpful during this part of the exam. In many cases, your doctor will conduct a physical and pelvic exam.

Additional tests – such as blood tests, gynecological ultrasound, hysteroscopy, MRI, and endometrial biopsy – may be recommended to rule out suspected causes of the abnormal bleeding.

Once you have a diagnosis, factors like your age, severity of the vaginal bleeding and other symptoms, and whether you wish to become pregnant, will be considered as you and your provider discuss the available treatment options.

If you experience bleeding or spotting between periods, after sex, or after menopause, contact one of the knowledgeable and compassionate OB-GYN providers at Women’s HealthFirst near Chicago, Illinois, by calling (847) 808-8884. You can also request your appointment now. Changes in the duration or extent of your monthly period is another reason to visit a gynecologist.

Visit one of our five locations in northwest suburban Chicago that is nearest you.

If you are an established patients of ours, feel free to use the convenient online patient portal to request an appointment, message your care team, and more.