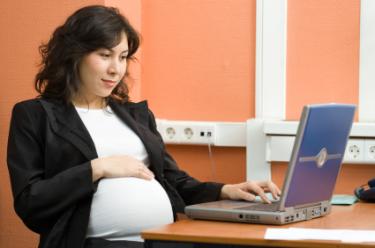 With increasing numbers of women joining the workforce in general, it is no surprise that the number of women working during pregnancy has also risen sharply.

However, a new study from the Netherlands cautions that standing and working long hours during a mother's pregancy may slow her baby's growth. According to the study, women who stood for long periods at work while pregnant had babies whose heads were, on average, 1 centimeter (or 3 percent) smaller in circumference than those of the average baby at birth.

Women who worked more than 25 hours a week had babies who weighed five to seven ounces less on average than babies whose mothers worked less than 25 hours a week, with the differences present from the third trimester on, the researchers noted. They also found there was no negative effect of working up to 36 weeks into pregnancy.

Although the researchers said that working long hours and engaging in physically demanding work during pregnancy did not put women at risk for preterm birth or babies with low birth weight (less than 5.5 pounds), the results diverged from previous studies that found women who work have fewer pregnancy complications than women who are unemployed.

According to Dr. Jill Rabin, an obstetrician and gynecologist at the North Shore Long Island Jewish Medical Center in New York, "the findings mean that, for women who want to work during pregnancy, by all means keep working."

Either way, a healthy mental state with minimal stress at work or at home can improve the health of the immune system, and help lead to better pregnancy outcomes.