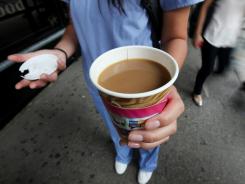 A new study of reporductive-age women by the National Institutes of Health reveals some surprising information when it comes to women and caffeine consumption.

Turns out that daily dose of caffeine may affect more than just your energy levels, depending on your race, that is.

While caffeine alters estrogen levels, it appears to have different effects in Asian and white women. In white women, for instance, coffee appears to lower estrogen, while in Asian women it has the reverse effect, raising levels of the hormone.

The study, which was published in The American Journal of Clinical Nutrition, analyzed data on more than 250 women ages 18 to 44 who consumed about 90 milligrams of caffeine a day, equivalent to roughly one cup of coffee. According to the researchers, about 90 percent of women nationwide between the ages of 18 and 34 drink the caffeine equivalent of one to two cups of coffee every day.

After controlling for variables, like age and diet, the researchers found that among Asian women, those who had 200 milligrams or more of caffeine a day— the equivalent to approximately two cups of coffee — had higher estrogen levels compared to those who consumed less. A similar pattern was seen among black women, though it was not statistically significant. In white women, however, 200 milligrams or more of caffeine appeared to have a slight lowering effect on estrogen.

It is unclear why caffeine would impact races differently, but it is likely that genetics has some influence on caffeine metabolism. Also interesting is that the source of caffeine seemed to make a difference. When the researchers looked exclusively at caffeine from beverages other than coffee — like green tea and soda — it was linked to higher estrogen in all women, regardless of race, perhaps triggered by various levels of antioxidants and other compounds in the drinks, as well as additives like milk and sugar.

Despite these findings, experts say women of child-bearing age who enjoy a daily cup of coffee or tea have little reason for concern. The effects of caffeine on estrogen are so minimal that in healthy women, it has no impact on ovulation or overall health, at least in the short term.

“This is important physiologically because it helps us understand how caffeine is metabolized by different genetic groups,” said Dr. Enrique Schisterman, an author of the study and senior investigator at the National Institutes of Health. “But for women of reproductive age, drinking coffee will not alter their hormonal function in a clinically significant way.”

For now, looks like that early morning pick me up is safe. Now that's something to buzz about!