Stillbirths: Declining, But No Less Devastating 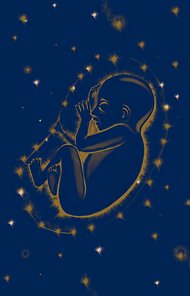 For most women, the pain and discomfort of childbirth is overshadowed by the joy of finally getting to hold their precious, blanket-swaddled newborn in their arms for the first time.

But not every woman is so lucky. Despite the technological advancements now available to monitor fetal development and well-being, the New York Times reports that each year 7,000 fetuses that pass the 20th week of gestation and 13,000 that reach the 28th week or beyond are born without any signs of life. And one in every 200 pregnant women who reaches 22 weeks of gestation will give birth to a stillborn baby.

The experience is understandably devastating.

“As soon as they learn they are pregnant, most women consider their unborn baby their child, and for many a stillbirth is like the death of a child,” said Dr. Robert Goldenberg, an obstetrician-gynecologist and author of The Lancet series.

Although the number of stillbirths has declined substantially since the 1940s, the problem persists today, devastating all those affected. And contrary to conventional wisdom, the problem is not just limited to low-income women or women in the developing world where access to health care is limited.

While more than 2.6 million stillbirths occur world-wide each year, with all but 2 percent of stillbirths taking place in low-and middle-income countries, “stillbirths continue to blight wealthy nations, with around one in every 320 babies stillborn in high-income countries,” The Lancet medical journal wrote.

In fact, according to Janet Scott of the Stillbirth and Neonatal Death Charity in London, “in high-income countries, although infant mortality rates have dropped, stillbirth rates have not changed in more than a decade.”

This is likely due to a variety of factors, such as the taboo nature surrounding stillbirths and the reluctance of many to acknowledge or talk about their losses.

Dr. Goldenberg explains, “Many of the tests that could clarify why a baby died are not done because the doctor and family feel badly, because the parents believe the baby has suffered enough and don’t want it disturbed any further, or because the hospital gets no extra payment for an autopsy.”

However, “when a careful autopsy is performed of both the baby and placenta and the baby’s chromosomes are examined, we can find an explanation 80 to 85 percent of the time,” Dr. Goldenberg wrote.

Despite the uncertainties, there are still a number of known causes, some of which have increased in recent years.

The single most preventable risk factor in high-income countries, accounting for up to 18 percent of stillbirths, is maternal weight and obesity, followed by maternal age over 35 and smoking during pregnancy. Women with diabetes or high blood pressure before becoming pregnant are also at higher risk for stillbirth, especially if their conditions are not controlled.

As with many other diseases whose likelihood increases with age, women over 35 face a 65 percent increase in the odds of a stillbirth compared with younger women. Also, as more women turn to in vitro fertilization to help them conceive, the number of stillbirths has increased.

“Without question,” Dr. Goldenberg said, “twins and triplets have much higher rates of stillbirth.”

Despite efforts to reduce medical inequities, the risk of stillbirth is nearly twice as high among African-American women as among white and Hispanic women. Same goes for rural women, who are at a relative disadvantage compared with their urban counterparts.

The good news is that the new health care law is designed to help get more women access to medical care early in their pregnancy. This should help reduce the number of stillbirths, which currently occurs 10 times as often as sudden infant death syndrome in the United States.

In the meantime, key, preventative behaviors such as maintaining a healthy weight, not smoking, regular visits with your medical provider, careful fetal monitoring, and cost-effective interventions such as inducing early labor in extreme cases, can help stamp out the devastating tragedy of giving birth to a baby bearing no signs of life.